Most of the neolithic rock carvings in Brittany feature the axe head. This is a pretty obvious representation of the polished axe heads found throughout the region in huge numbers.

What's very interesting about these axes, is that many of them are unused, or made from materials that make them completely impractical to use. Often they come to light in large caches.

It's pretty obvious they're meant as currency, or at least a show of status. From an anthropological point of view, that makes a lot of sense: for almost all of human history, the axe (not the knife, sorry bushcrafters!) has been the universal tool. We have been reliant on wood for our survival, and a small axe is able to do everything we need to do to make other tools, weapons, and prepare our food. If we look at Oetzi's gear, the most valuable item in his gear was his axe.

So one axe represents survival. What happens if you lose your axe? You are then dependent upon the assistance of others. An axe represents independence. A *spare* axe represents wealth - even if you lose an axe, you're still capable of caring for yourself. So a man with 3 axes, or even more, is wealthy indeed.....

During a recent trip to Morbihan, my partner and I took a guided tour of the neolithic cairn on the Ile de Gavrinis. The cairn is the key site in the complex of megalith sites dotting the whole Morbihan area. Photography inside the cairn is forbidden, so I can only offer pictures taken outside (plenty of pictures on the net of the carvings inside though). 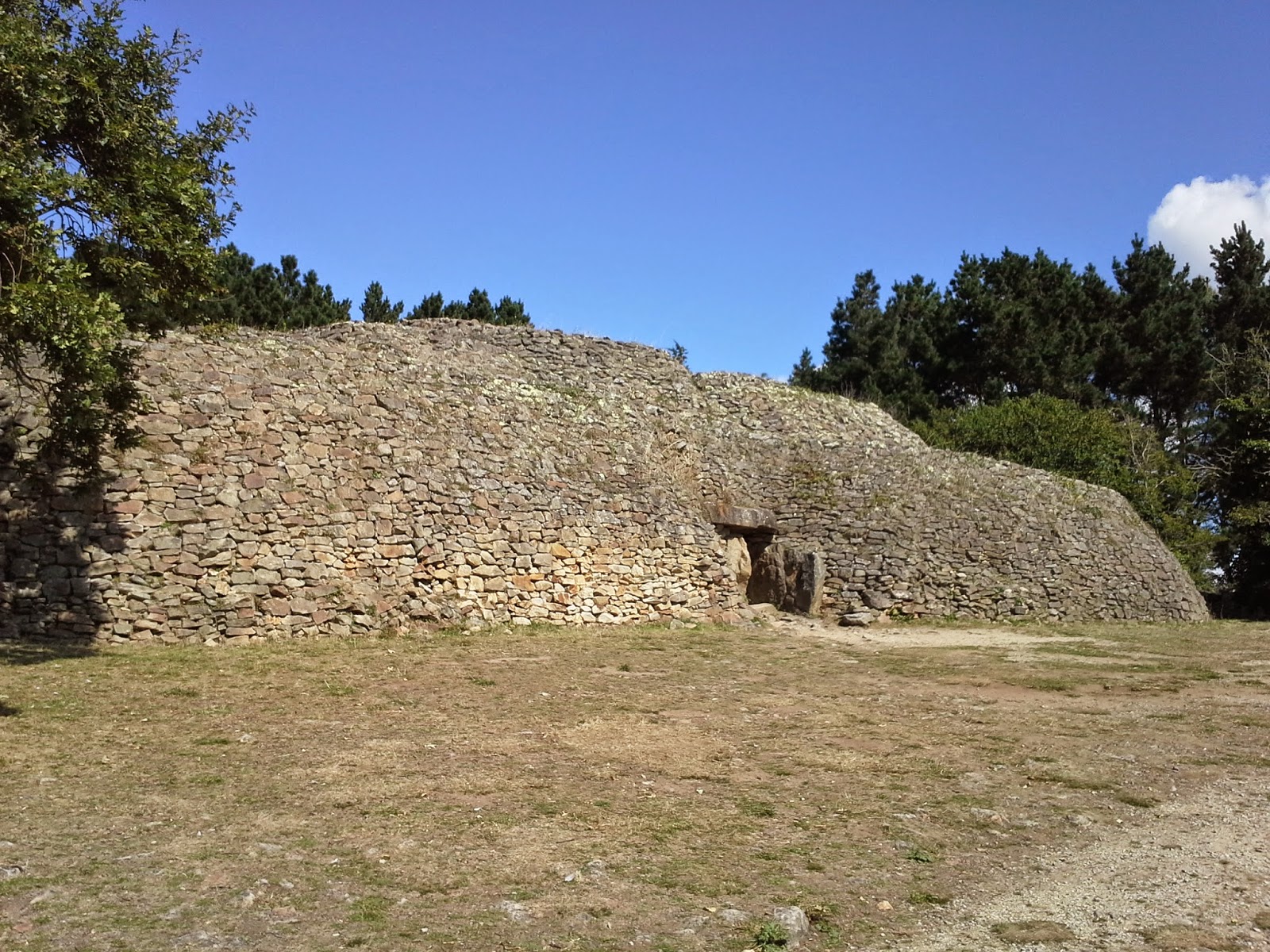 What interests me particularly about this site is the fact that it is roughly coeval with the cup and ring markings scattered throughout Europe, and concentrated so spectacularly on Rombald's Moor. The carvings in the Morbihan area look so very much more sophisticated, but perhaps they are just much better preserved. After 5000 years of weathering, the outside carvings are dim at best.


I've long thought that the cup and ring markings could form some kind of map or 'land registry', with cups denoting homesteads and rings denoting boundaries, or perhaps importance. The straight lines that we find on some of the better preserved cup and ring stones (like the Badger Stone for example) could represent geographic features to orient the map. These carvings from Locmariquer show similarities to cup and ring markings, and also have perhaps the look of a map: 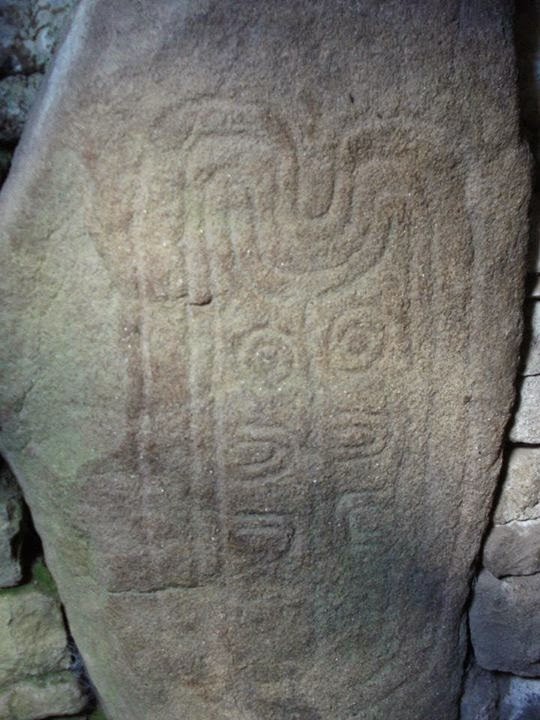 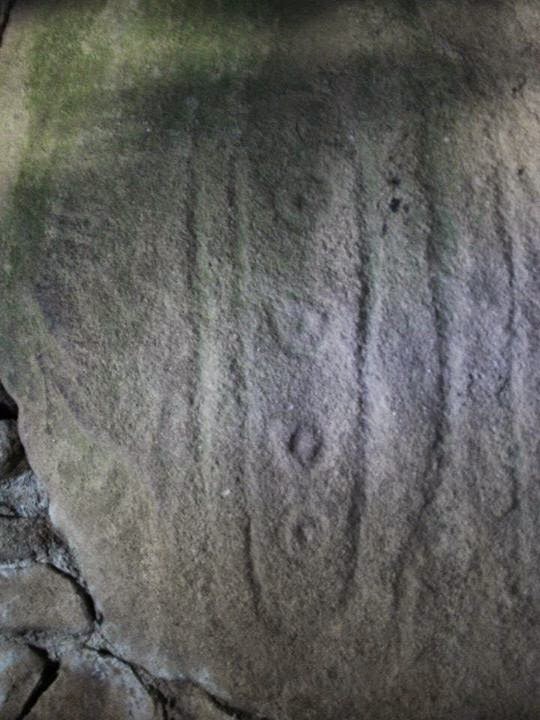 Much of the carving in the Gavrini site looks abstract*. The swirling patterns covering most of the slabs look like they're just there for decoration, although one set of patterning looks like it could be a torso, and there is another (this photo shows a reproduction) that is possibly a bow with siyahs and a recurved tip: 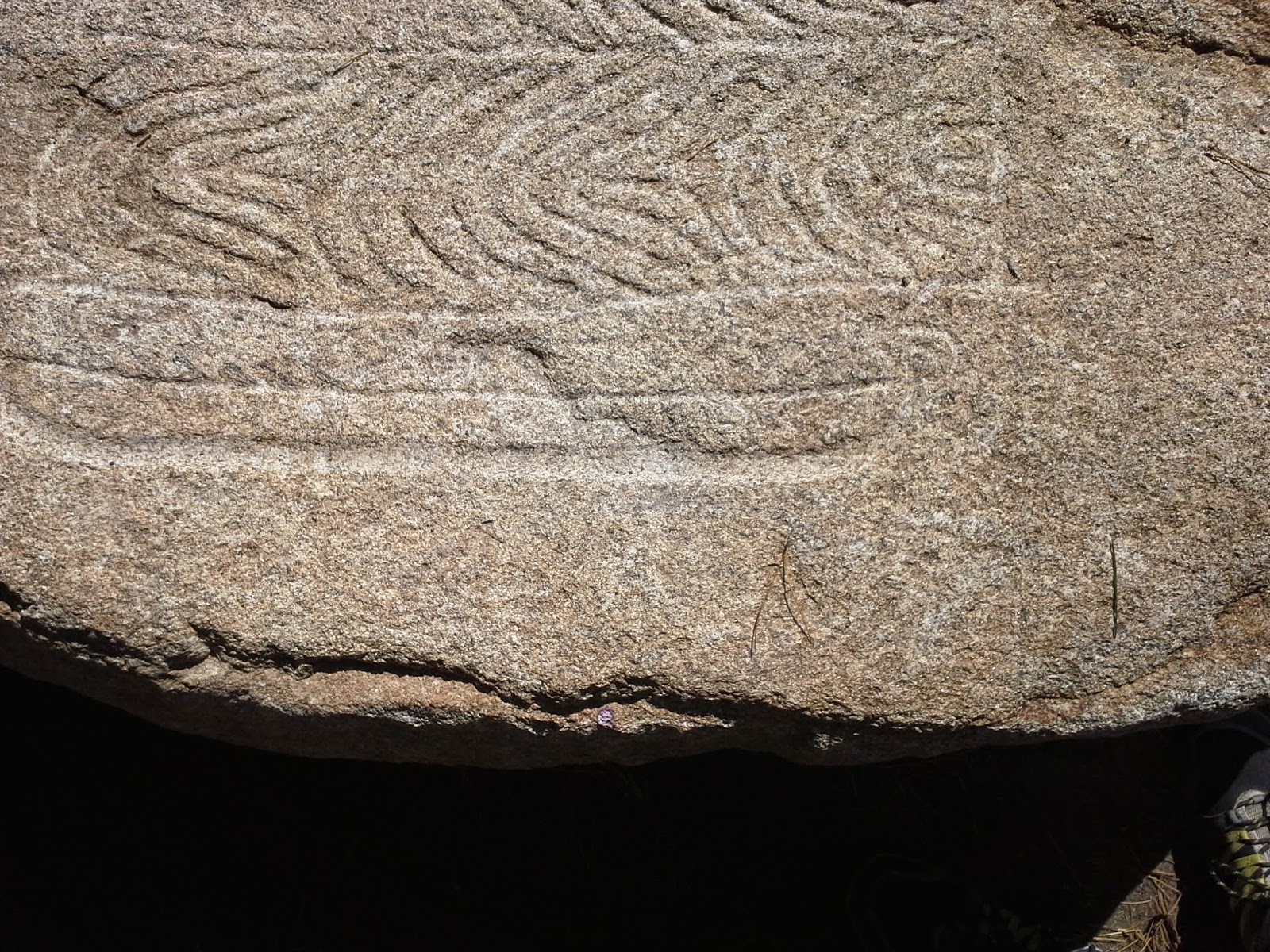 Certainly there are microlith finds from the area that would seem to suggest bows were being used in the area at the time.

There are also innumerable axe symbols on the Gavrini carvings: 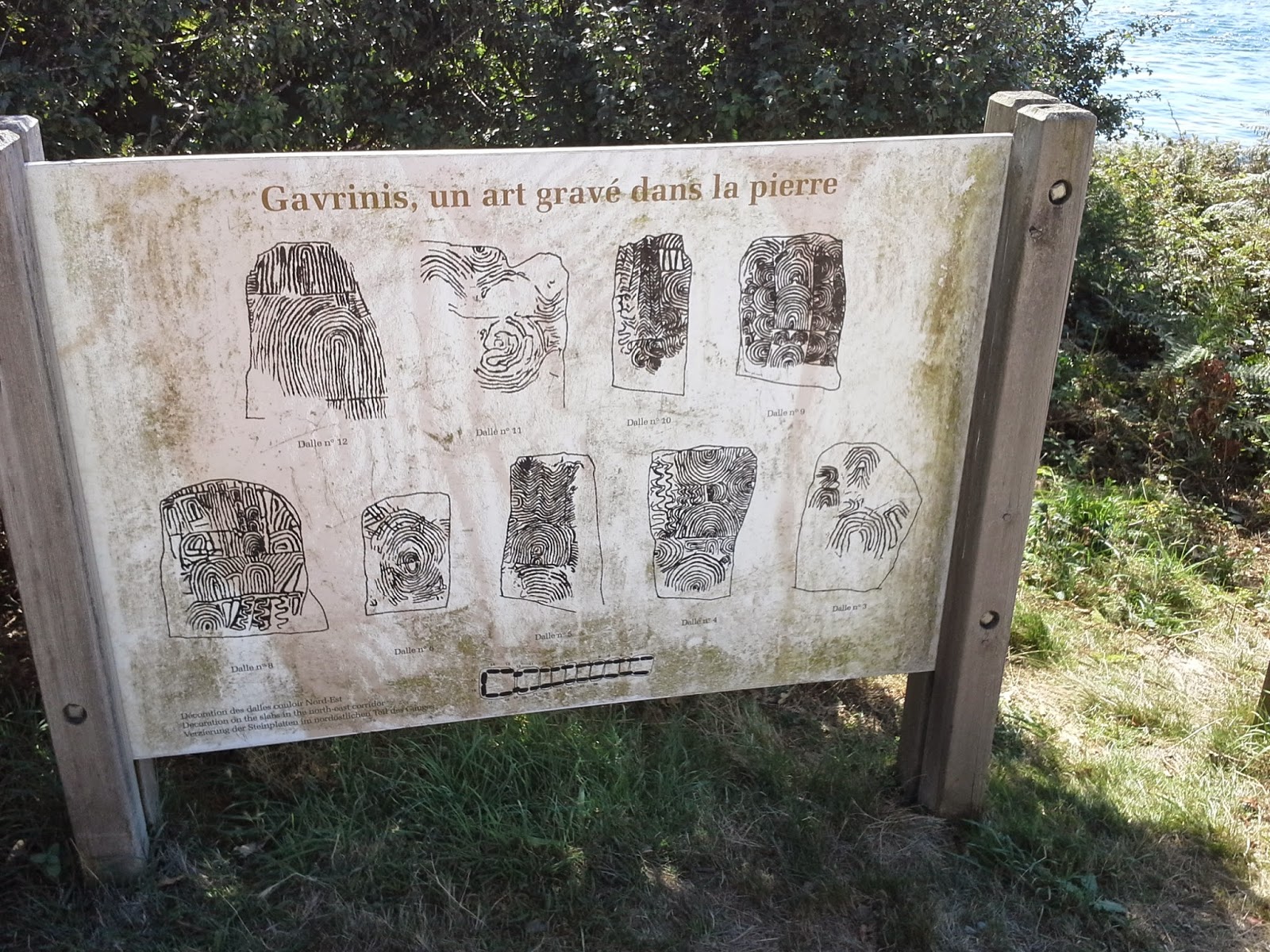 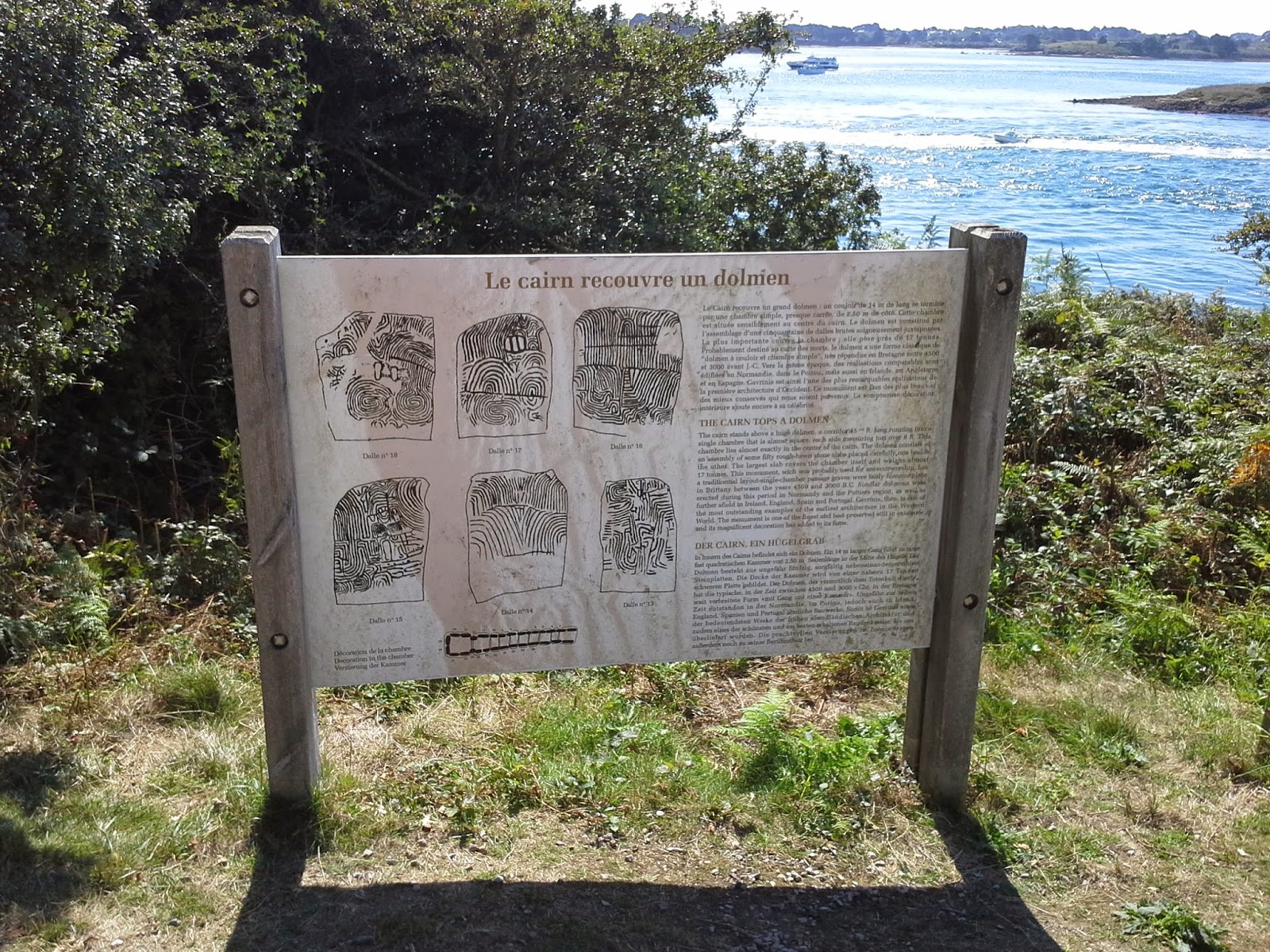 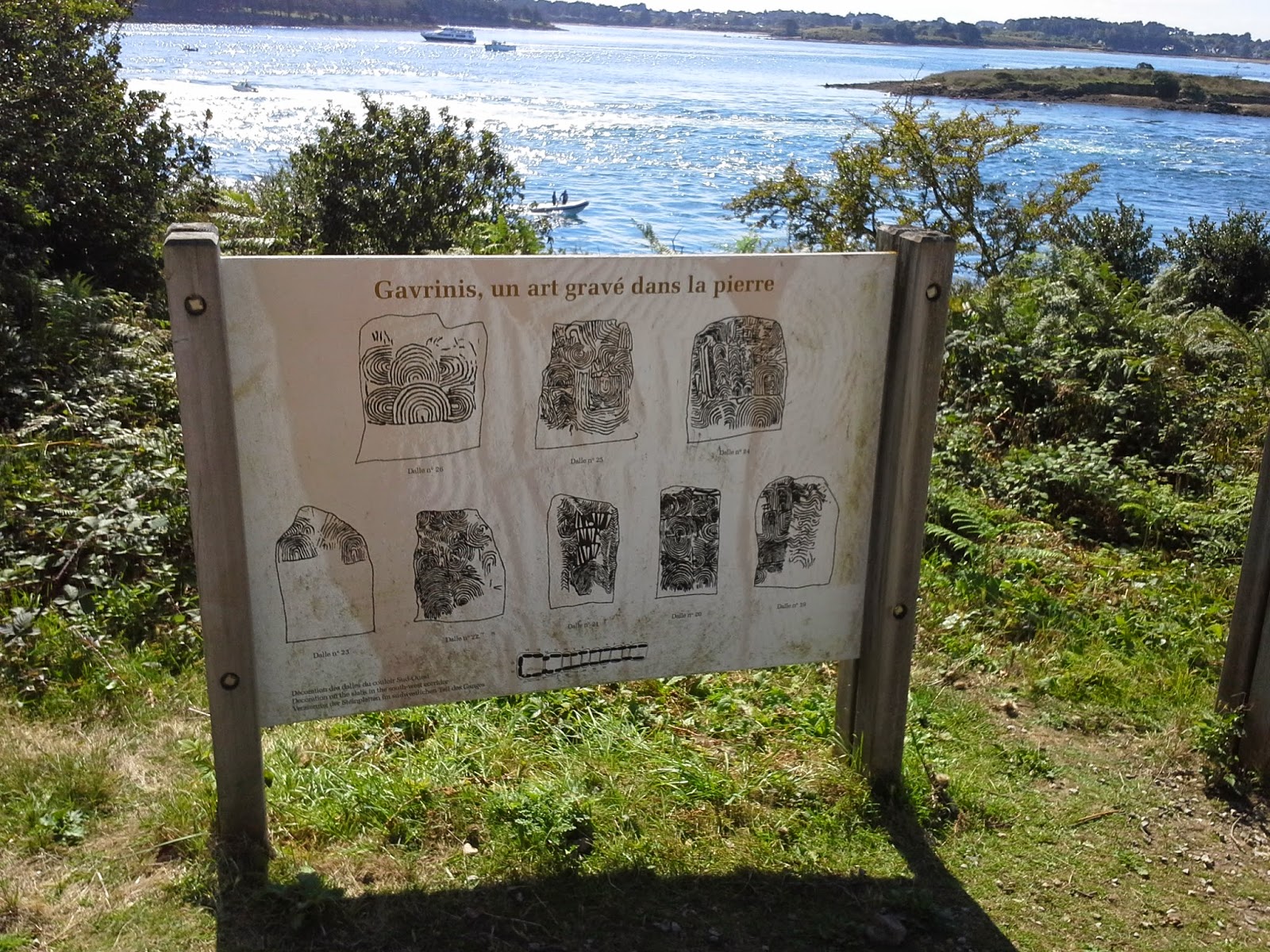 The axe symbols are very frequent in the Morbihan carvings. Which makes it odd that we don't see them alongside cup and ring markings around Rombalds moor.

It's interesting also that some of the carvings in Morbihan are very clearly representational - such as the axes, and this 'axe plough' from the roof of the Merchants Table in Locmariaquer. 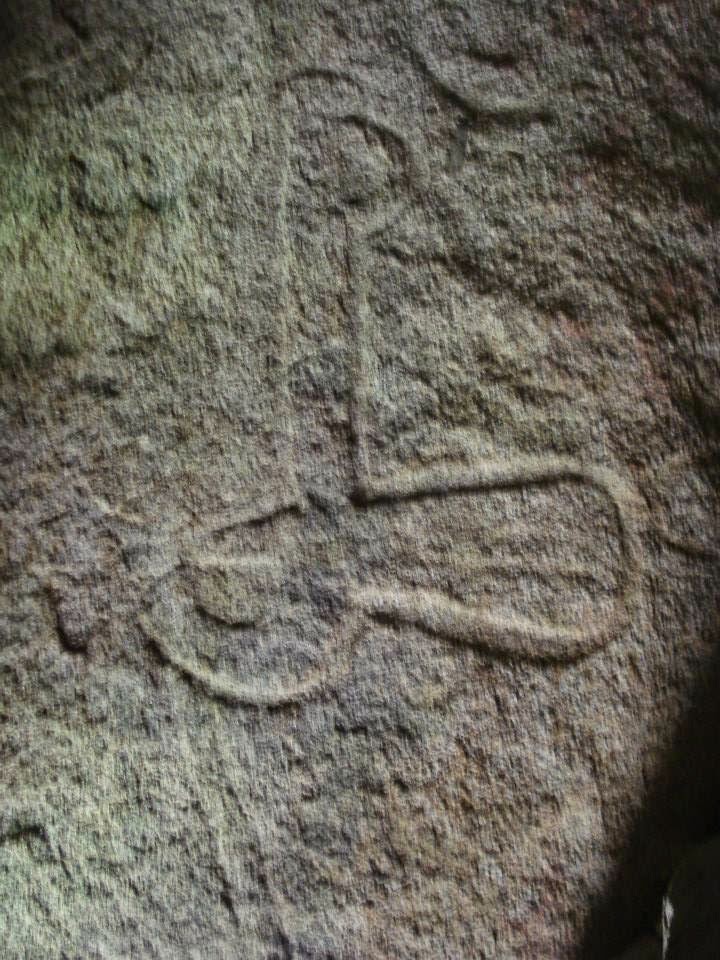 Yet there appears to be no representational carving at all in the Rombald's Moor carvings. Perhaps all the carvings are representational, and we just don't know what of.....

*Although I don't think I believe this one myself, here's an interesting passing thought. Right through the Iron age in northern europe, field enclosures are mostly round - square enclosures seem to be a Roman innovation. Recent work in permaculture has found that maximising boundary lines increases crop yields - the highest yields come from the edges where the plants get maximum sunlight & water. Maybe the swirling lines at Gavrini are meant to represent plough furrows?
Posted by MrHare at 06:40 No comments:

MrHare
I live in the North of England. It rains a lot here.